During the time of Western expansion, settlers encroached on the Cherokee Neutral Territory in SouthEast Kansas. Just south of what one day would become Riverton and the confluence of Spring River and Shoal Creek, the settlement of Lowell sprung up in the 1860’s. Shortly after the Civil War, the small Quaker community of Lowell, had a mill, lime kiln and a school. The small town expanded when Sylvester Osborn and his young bride, Jennie, arrived at the Quaker settlement. They opened the Osborn Feed Store next to the set of railroad tracks that  connected Baxter Springs - the first cow town in Kansas- and what would one day become the town of Galena. Eventually, the townsfolk of Lowell saw the need for a post office. In the late 1860’s, with the help of Dad Varrick, an influential businessman living in Baxter Springs, the first post office was established within the Osborn Grocery & Feed Store. Once the Post was established on March, 10th 1868, it was named the Varck Post Office in Mr. Varrick’s honor. Interestingly, the train didn’t actually stop at the Varck Post Office.  As a matter of fact, it didn’t even slow down. The mail bag was thrown off the train, and outgoing mail was collected by a mail hook that the train would grab while chugging down the line. In 1898, the original one story feed store that sat just south of the railroad tracks was replaced by the now standing two story Osborn Grocery.  This building served as a general mercantile, and the upstairs apartment was the home of the Osborn family. 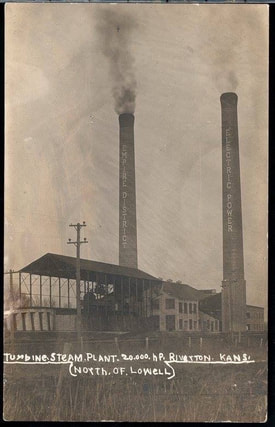 Late 1890’s
According to Cyndee Osborn Sanders, great-granddaughter of Sylvester and Jennie, Osborne Grocery and Feed was actually robbed by horseback.  Fearing that the bandits would return, Sylvester’s brother swore he would never work in the general store again.
1906
Construction of the power plant began. The region had a new industry, and both the town and this building had a new name.  The area became known as Riverton and the post office became The Riverton Grocery and Post.
Early - Mid 20th Century
For the first half of the 20th Century the Riverton Grocery was a thriving local business and was operated as a general store by Dale Card until the late 1960’s.
1993
The building suffered damage in the Great Flood of 1993.  The Riverton Post Office was moved 3 blocks north of Riverton, and the Old Riverton Post fell into ill repair
2005
Purchased by Jim Adams for $2000 and completely restored over the next year. Was home to The Old Riverton Post Antiques & Gifts.
2008
Adams sold the building, and the new owners lived in the building for a couple years and transferred out of state.  Unfortunately, due to lack of attention over the next few years and a massive water leak, The Old Riverton Post was back in a dilapidated condition.
2016
Jim and Kristi Adams purchased the building from The First Baptist Church of Riverton and refurbished the building, completing the 60 person event center and The Old Riverton Post Bed & Breakfast in the spring of 2018.